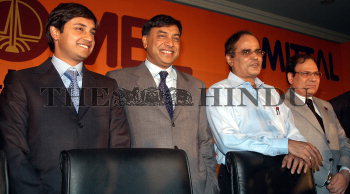 Caption : Lakshmi Niwas Mittal, Chairman and CEO, Mittal Steel Co. and Director on Board, ONGC Mittal Energy Ltd. (OMEL), with Aditya Mittal (left), his son and President and CFO, Mittal Steel, M.S. Srinivasan (second right), Secretary, Ministry of Petroleum and Natural Gas and R.S. Sharma (right), Chairman and Managing Director, Oil and Natural Gas Corporation, at a press conference in New Delhi on July 7, 2006. L.N. Mittal said his company, Mittal Steel, would invest more than 300 billion rupees (6.7 billion dollars) on a new plant in South-East India that would produce 12-million tonnes of steel annually. The plant in the ore-rich Eastern State of Orissa will be completed in two phases. Mittal also said that his firm will work together with its Indian state-run partner, Oil and Natural Gas Corporation (ONGC), in 21 countries. ONGC Mittal Energy Ltd. (OMEL), the flagship joint venture of the two firms to buy energy assets outside India, will also invest more than six billion dollars in setting up a refinery, power plant and railway lines in Nigeria. Photo: S. Subramanium