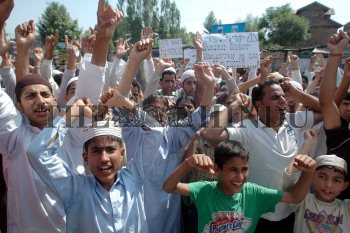 Caption : Kashmiri muslims shout pro-freedom slogans during a demonstration in Srinagar on July 07, 2006. Protesters were demanding the removal of the paramilitary camp from their area after paramilitary soldiers killed one civilian last week. Photo: Nissar Ahmad