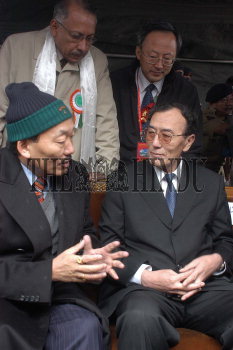 Caption : The Chief Minister of Sikkim, Mr. Pawan Chamling (with blue black cap) and Chairman of Tibet Autonomous Region of China, Mr. Champa Phunstok are engaged in a discussion after opening of the Nathula Pass trade route on July 06, 2006. The prospect of opening up of the border trade between india and China through Nathula pass offers both challenges and opportunities for the State of Sikkim. It is in this context that the importance of industry and trade lies in optimal use of its resources and making the most of the emerging opportunities to realize the Stateâs potential of industry and trade which would ensure smooth transition of the State from being overwhelmingly dependent on the public sector to a vibrant economy based on private sector initiative, enterprise and entrepreneurship. Photo: A. Roy Chowdhury 6-7-2006