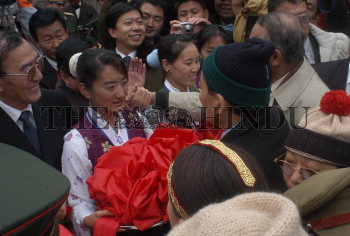 Caption : The Chief Minister of Sikkim, Pawan Chamling (right with green black cap), and Chairman of Tibet Autonomous Region of China, Champa Phunstok, cutting the ribbon during the opening of the Nathu La Pass trade route on July 06, 2006. It will be the dawn of a new era in India-China ties as the border trade resumes, in Gangtok. Photo: A. Roy Chowdhury