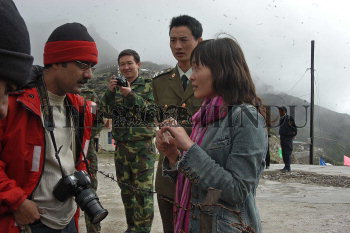 Caption : Chinese journalist with indian counterparts at Nathula. The stage is set for the tomorrows opening of the Indo-China trade border through Nathula Pass at 14, 400 ft on Himalayan range located on the northern part of Sikkim on July 6, 2006. Army officers and officials are busy with the last minute arrangement in the border. Photo: A. Roy Chowdhury 5-7-2006