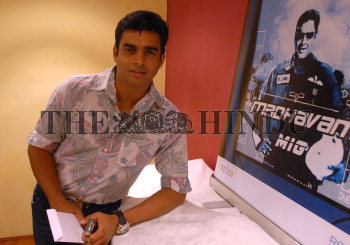 Caption : Actor Madhavan launched a series of mobile games titles based on the actor by Paradox , a game development company . The first game released "Madhavan's MIG " featuring the actor has been released for Reliance Mobile World in Chennai on July 5, 2006. Photo: Shaju John