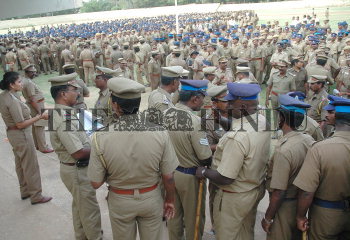 Caption : Police personnel assemble at the Bharathi Stadium on NLC campus in Neyveli on July 04, 2006, for deployment at vitial points, following the indefinite strike called by the trade unions, against the Centre's move to disinvest 10 per cent shares in Neyveli Lignite Corporation. Photo: T. Singaravelou