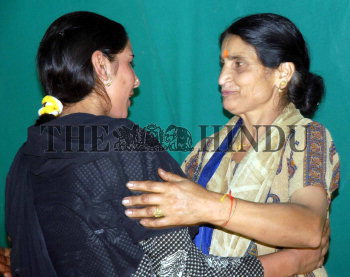 Caption : A Kashmiri Muslim woman hugging a migrant Kashmiri pandit during a Maha Yagha at Tripuri Sundari Temple at Khan Barnan Devsar in Kulgam some 75kms from South of Srinagar, on July 04, 2006. Kashmiri Muslims welcoming the devotees during the Maha Yagha, which is being performed after 17 years. Hundreds of Kashmiri Pandits participated in the yagha pooja. Photo: Nissar Ahmad