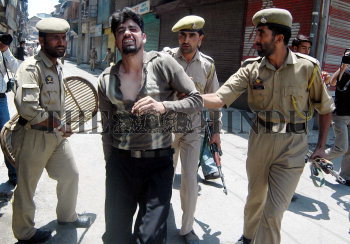 Caption : Police personnel holding and beating one of the protestors during the protest demonstration against manhandling of two youth by CRPF forces at Lal Chowk in Srinagar on July 04, 2006. Police used batons and arrested 5 protestors. Photo: Nissar Ahmad