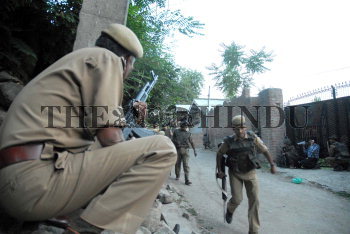 Caption : A security force cop taking position during the gunbattle with militants at Ishber Nisaht in Srinagar onJuly 03, 2006. One militant commander was killed and three paramilitary soldiers were injured in a gun battle with a suspected militants. Photo: Nissar Ahmad