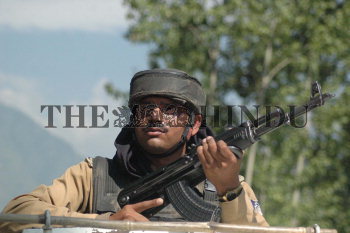 Caption : An paramilitary soldier keeps vigil as he stands atop of an armoured vehicle after an encounter in Tailbal on the outskirts of Srinagar on July 3, 2006. Qasin District Commander of Al-Barq Tanzeen and his associate were killed by Paramilitary forces , officials said. Photo: Nissar Ahmad