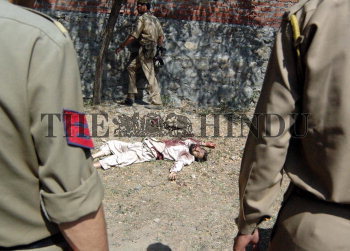 Caption : Paramilitary soldiers stand near the body of Qasim District Commander, Al-Barq who was killed in a gunbattle at Wangund, in Tailbal on the outskirts of Srinagar, on July 3, 2006. Qasin District Commander of Al-Barq Tanzeen and his associate were killed by Paramilitary forces, officials said. Photo: Nissar Ahmad