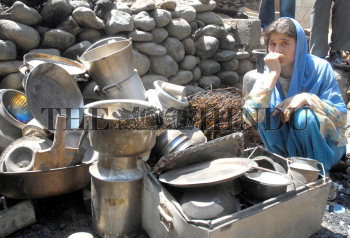 Caption : A girl sitting near her damaged belongings as her house was damaged during an encounter with militants at Gamroo village of Bandipora some 80 kms. north of Srinagar on July 03, 2006,Two (LET) Militants one army soldier and one civilian were Killed and six residential houses were gutted during the long drawn gunbattle. Photo: Nissar Ahmad