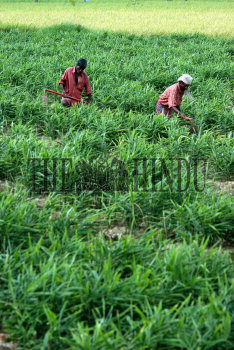 Caption : Farmers engaged in ginger cultivation in Vadakkumchery, Palakkad district of Kerala. Weak supply from other origins has pushed up the exports of ginger from India during Apr - May 2006. Total export was 1,750 tonne valued at Rs7.25 crore as against 1,153 tonne valued at Rs6.94 crore. Thus, there was an increase of 52 per cent in volume and four per cent in value. However, the unit value fell this year to Rs41.43 a Kg from Rs60.25 a Kg in Apr-May 2005. Photo: K.K. Mustafah 3/07/2006