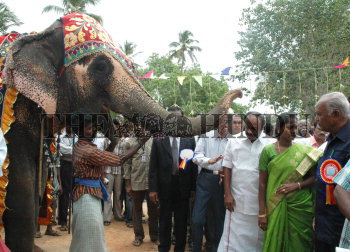 Caption : K.R. Periakaruppan, Tamil Nadu Minister for Hindu Religious and Charitable Endowments and A. Tamilarasi, Minister for Adi Dravidar Welfare, being welcomed by an elephant at Yadava College, Madurai, where a newly constructed women's hostel was to be inaugurated later, on July 01, 2006. Photo: G. Moorthy