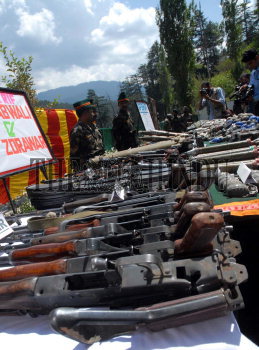 Caption : Army display arms and ammunitions recovered from militants in different opertion in Kashmir Valley, a army camp at Chokibal in Srinagar on July 01, 2006. Eight militants were killed when they were infiltrated in to Indian side of Kashmir, police and army said. Photo: Nissar Ahmad