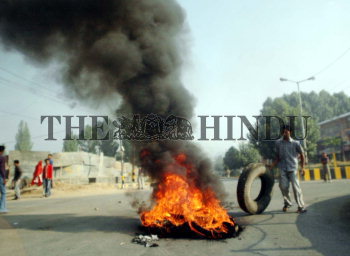 Caption : Kashmiri protestor throws a tyre into a flame in protest against the killing of a Kashmiri civilian by paramilitary soldiers (CRPF) in Srinagar on July 01, 2006. Hundreds of residents angered with the killing of Inayatullah Bhat, who was fatally shot as he was closing his shop on June 30, 2006 evening, clashed with police and staged demonstrations. Photo: Nissar Ahmad