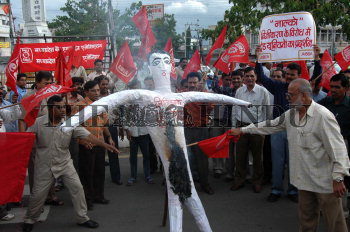 PROTEST AGAINST THE DISINVESTMENT OF PROFIT MAKIN

Caption : Trade Union workers burning an effigy of Union Finance Minister, P. Chidambaram in Bhopal on June 30, 2006 to protest against the disinvestment of profit making Nalco by the Union Government. Photo: A.M. Faruqui