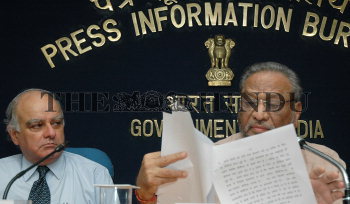 Caption : Union Minister of State for Petroleum and Natural Gas Dinsha Patel at a press conference in New Delhi on June 30, 2006, to announce the results of Global Competitive Bidding for exploration of the 10 coal bed methane (CBM) blocks under the third round of Central Governments' CBM policy (CBM-III). Anil Razdan (left), Additional Secretary, Ministry of Petroleum and Natural Gas, is also seen. The Minister said the CBM-III round had attracted more bids than the earlier two rounds put together. CBM-1 received 16 bids from six Indian firms while CBM-II got 14 bids from seven Indian and one foreign company. Whereas the CBM-III received 54 bids from eight foreign players and 18 domestic firms. Photo: Rajeev Bhatt