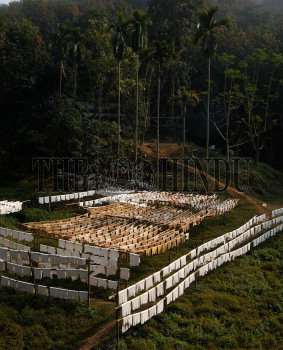 Caption : Rubber being dried up in Rubber collecting centre in the outskirts of Guwahati city, on June 27, 2006. The Rubber Board of India is concentrating on the north-eastern states for rubber cultivation as there is no scope for further expansion of rubber cultivation in country's rubber state, Kerala. According to the senior Rubber Board officials they are gradually diverting their interests to Assam, Mizoram and other north-eastern states. At present rubber is being cultivated in 29000 hectares of land in Tripura and 10,000 hectares in Assam and in some areas of Kolashiv district of Mizoram and Rs. 18 crore is being invested by Rubber Board alone in north-east. More than 15,000 people, mostly tribals who were earlier practicing jhum cultivation were rehabilitated through rubber cultivation and they are now earning their livelihood in a decent manner in Northeast India. Photo: Ritu Raj Konwar 28/06/2006