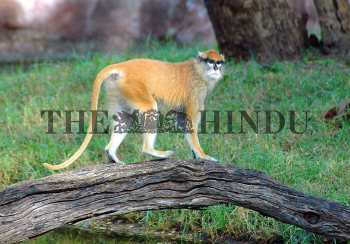 Caption : A lone Patas Monkey at the Nehru Zoological Park in Hyderabad. Zoo authorities say they are trying to find a mate for the primate which is known to live in groups. Erythocebue Patas Patas, these monkey are found in Sub-Saharan Africa from Senegal in the forest west Sudan in the East. They move in the group is 15 male and female ratio varies from 1 male to 4 females and upto 12 females.They live up to 20 year in captivity. Photo: Mohammed Yousuf