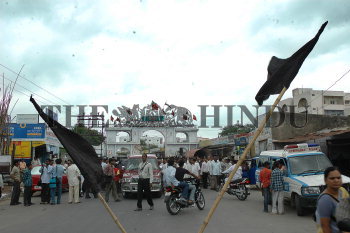 Caption : The arch leading to Moula Ali in Malkajgiri damaged when a truck rammed into it in Hyderabad in the wee hours of June 28, 2006. People are concerned that this two century old kaman could collapse at any time. The Malkajgiri municipal authority has handed over the issue to Road and Building Department who have not reported to the scene till evening. Photo: Mohammed Yousuf