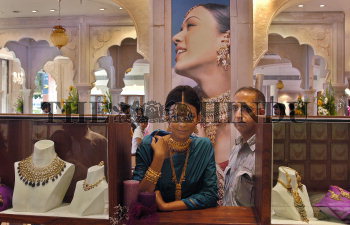 Caption : Mr. C. K. Venkatraman, Chief Operating Officer, Tanishq along with a model wearing new kind of jewellery, pose at the new concept jewellery mall 'Revitaliser of Tradition' opened by Tanishq in Kolkata on June 28, 2006. The company has created the concept store with an ambiance of the ancient times and used special motifs inspired by the inlay work of the Taj Mahal. The company will open four such concept store in four major cities in India soon. Photo: A. Roy Chowdhury