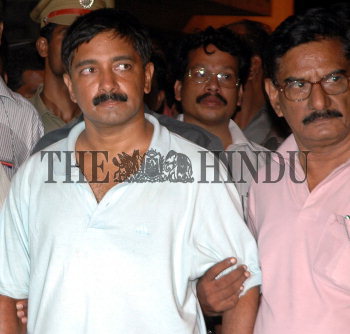 Caption : Krushi Bank Chief, K. Venkateswara Rao being taken into custody after he is produced before the Metropolitan Sessions Judge at Banjara Hills Road No.10, in Hyderabad. Venkateswara Rao fled the country five years ago allegedly after DUPING 8,300 depositors of Rs. 25 crores, is brought to the city on June 27, 2006 by a Special Police Team from Bangkok. Photo: Mohammed Yousuf