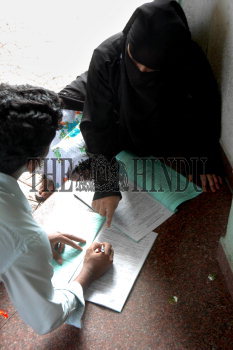 Caption : Application forms being filled in by a person wishing to go for Haj pilgrimage in Hyderabad on June 27, 2006. On the last the State Haj Commtiee has recieved 9000 applications those who wishing to go for annual congegation at Holy city of Macca in Kingdom of Saudi Arabia from Andhra Pradesh . The number has exceeded the state quota of 4955 and the authorities have decided to go in for lottery system to pick the lucky winners who will take first flight in November last week to Jeddah. Photo: Mohammed Yousuf.