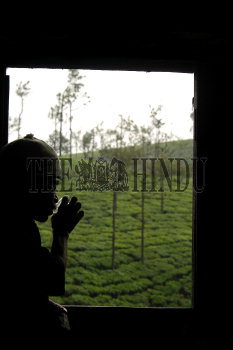 Caption : A tea plantation worker drinks tea amidst the backdrop of tea plantation in Valparai in Tamilnadu. Indiaâs growing domestic market and the relatively better revenue earned in domestic sales has dimmed the export prospects of tea in the country, pushing the countyâs rank in the global tea market from first to fourth place. Tea exports from the country register a 20 per cent drop in the first four months of current fiscal, standing at 45.37 million Kgs from 56.89 million Kg same period last year. Home market consuption alone last year was 740 million Kg. Photo: K.K. Mustafah 27/06/06