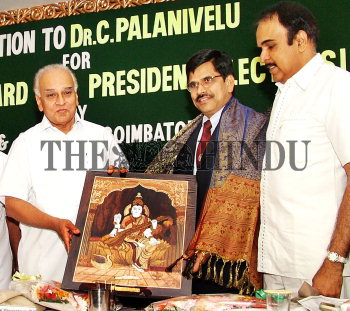 Caption : The Chairman of Bharatiya Vidya Bhavan, B.K. Krishnaraj Vanavarayar (left), felicitates C. Palanivelu (centre), Director of GEM Hospital, on his being chosen for the Dr. B.C. Roy Award and for being elected president of Association of Surgeons of India, at a function, organised by the Coimbatore chapter of the association in the city on June 25, 2006. The former State president of the Indian Medical Association, A. Muruganaathan (right) looks on. Photo: S. Siva Saravanan