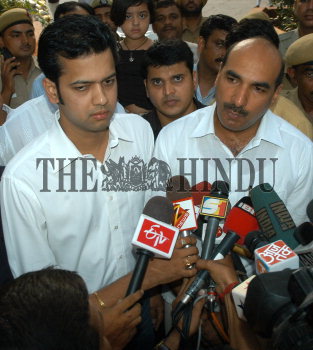 Caption : Rahul Mahajan (left) along with his legal advisors, after meeting with senior Delhi Police official at Tughlaq Road Police Station, talking to media person in New Delhi on June 25, 2006. Rahul Mahajan, the son of slain politician Pramod Mahajan, was released from jail on bail, after he was arrested for allegedly consuming drugs and destroying evidence. Photo: Shanker Chakravarty