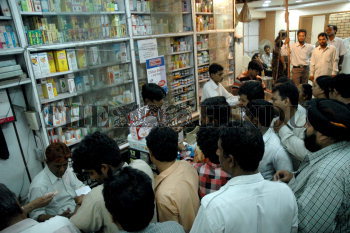 Caption : With reports of Chikungunya fever spreading in Hyderabad, there is a heavy rush at homeo stores in the twin cities to purchase preventive drugs for the fever. Chikungunya is a rare form of viral fever caused by an alphavirus that is spread by mosquito bites, hundreds of people are admitted in the various hosptials for treatment with the symptoms. Earlier the health authorities sounded Chikungunya fever alerts in the state of Andhra Pradesh. Photo: Mohammed Yousuf