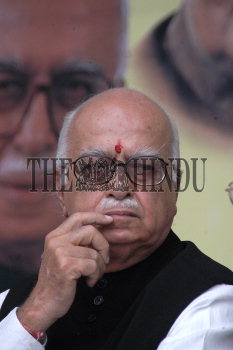 Caption : Mr. L.K. Advani, Leader of the Opposition and BJP leader, in New Delhi on June 25, 2006, with party activists, during the so-called 'Save Democracy Day" on the 31st anniversary to mark the declaration of the State of Emergency on June 25, 1975 for a period of 18 months. Photo: Kamal Narang