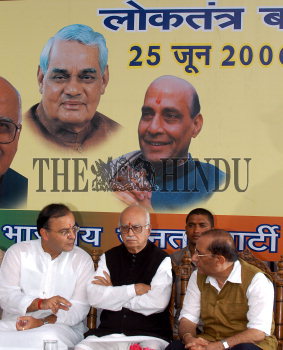 Caption : Leader of the oppotion and BJP Leader, L.K. Advani with BJP senior leaders, V.K. Malhotra (right) and Arun Jaitley (left) at the Loktantra Bachao Diwas function, so-called 'Save Democracy day" held on the 31st anniversary of the start of a State of Emergency, in New Delhi 25 June 2006. A state of emergency was declared on 25 June 1975 for a period of 18 months, at the BJP Delhi Pradesh office in New Delhi on June 25, 2006. Photo: Shanker Chakravarty Digital Image.