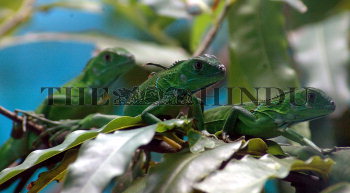 Caption : Days old Iguana, an endangered species, climbing inside an enclosure after they hatched at Nehru Zoological Park in Hyderabad on June 24, 2006. The exotic species are the first to be born at the city zoo. A total of 16 hatchlings have been separated from parents and kept on display. Photo: Mohammed Yousuf