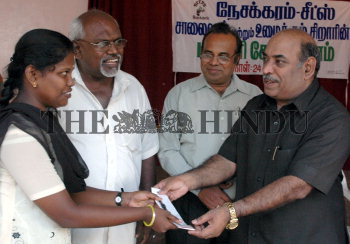 Caption : One of the Plus Two students who completed the class being felicitated during Nesakkaram - Seeds' school enrolment day being held at St. Anthony's Anglo Indian High School at Pudupet, Egmore in Chennai on June 24, 2006. More than 500 street and working children gathered to celebrate Nesakkaram Seeds' "school enrolment day". The non-Governmental organisation has been enabling out of school children to enter mainstream schools with counselling and material assistance from year 2000. Around 60 children were enrolled on June 24 and provided with school kits at the event attended by other children Nesakkaram is working with. Fifty children who have returned to school with the organisation's help and had completed classes ten or twelve were felicitated. Photo: R. Shivaji Rao