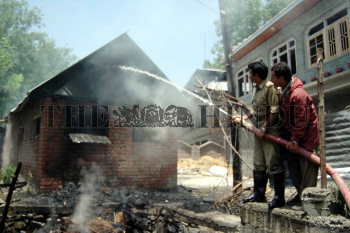 Caption : Fire fighters dousing the flames of a damaged house which was damaged following a gunbattle with suspected militants in Ratnipora, Pulwama, some 35 kms south of Srinagar on June24, 2006. Two militants of Hizbul Mujahideen, and an army soldier were killed in a long gunbattle. Photo: Nissar Ahmad