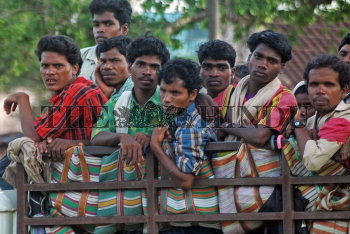 TRIBAL VILLAGERS FROM BASTAR MIGRATING FROM THEIR

Caption : Tribal villagers from Bastar are often seen at Raipur or other towns of Chhattisgarh in search of livelihood. Photograph shows one such group in Raipur on June 23, 2006. With the increasing Maoist violence and retaliatory killings following the Salwa Joodum movement have forced tribal villagers to migrate from their villages. Photo: Akhilesh Kumar