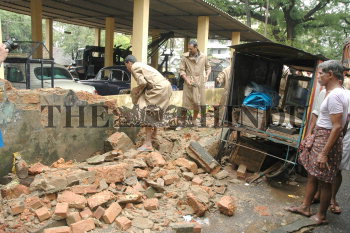 Caption : A portion of the compound wall of the Armed Reserve Police camp, Ernakulam, collapsed in the relentless rain and winds which lashed the city on June 23, 2006. Many bunk shops suffered damage in the incident. Water-logging because of clogged drains affected movement of traffic in several areas. Photo: Vipin Chandran