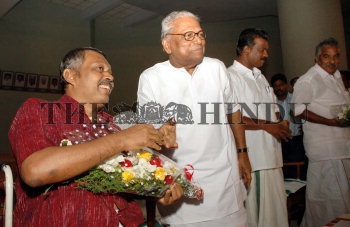 Caption : Kerala Chief Minister V.S. Achuthanandan congratulating Simon Britto Rodrigues, who was nominated to the Assembly as representative of the Anglo-Indian community, after the swearing-in ceremony in Thiruvananthapuram on June 23, 2006. Speaker K. Radhakrishnan and Leader of the Opposition Oommen Chandy are also seen. Photo: S. Gopakumar