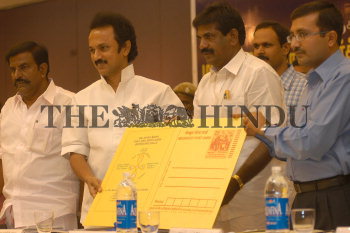 Caption : Tamil Nadu State Minister for Local Administration, M.K. Stalin, handing over to the District Collector, Ashish Vachani, the first of the one lakh post cards to be released in connection with Total Sanitation Campaign in Tiruchi on June 22, 2006. The State Forest Minister, N. Selvaraj and Transport Minister K.N. Nehru look on. Photo: M. Moorthy