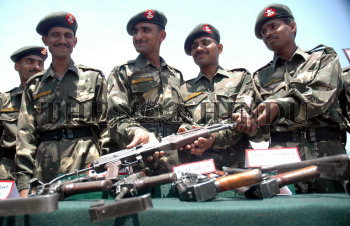 Caption : Army soldiers display seized arms and ammunition at the camp in Kupwara, 89 km north of Srinagar, on June 21, 2006. During a search operation the Army troops recovered a large quantity of arms and ammunition from a militant hideout in the forest area of Kupwara. Photo: Nissar Ahmad