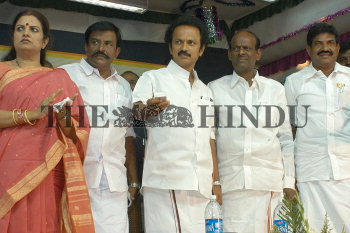 Caption : The Tamil Nadu Local Administration Minister, M.K. Stalin is pressing the button to unveil the plaque to mark the commencement of the expansion work of the Central Bus Stand in Tiruchi on June 21, 2006. Picture shows from left: the Mayor, Sarubala R.Tondaiman, the Transport Minister, K.N. Nehru, the Union Minister of State for Railways, R. Velu, and the Forests Minister, N. Selvaraj look on. Photo: M. Moorthy