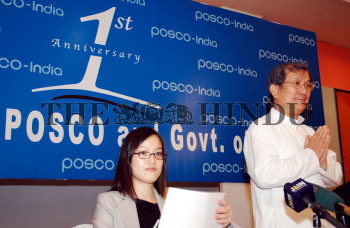 Caption : Soung-Sik Cho, CMD of POSCO with traditional costume of Orissa, posing to the photographers during the press conference on the first anniversary of signing of the MoU with Orissa Government, in Bhubaneswar on June 21, 2006. Photo: Ashoke Chakrabarty