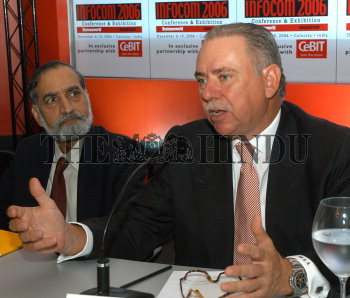 Caption : Kiran Karnik (left), President, NASSCOM and Eberhard Roloff, Director, Central and Eastern Europe, Deutsche Messe AG, Hannover, Germany, at a press conference during the announcement of CeBIT and (NASSCOM-Businessworld) Infocom 2006 exclusive partnership, in New Delhi on June 21, 2006. CeBIT, the world renowned IT trade fair organised by Hannover, will enter India in partnership with Infocom, a Nasscom-Business World joint venture, for holding an IT fair in Kolkata in December. Photo: Shanker Chakravarty