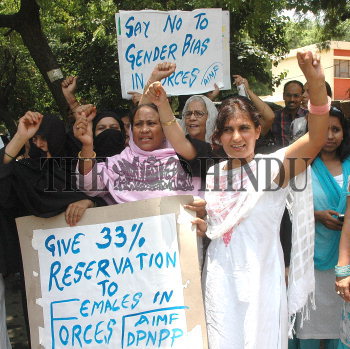 DEMO BY ALL INDIA MINORITIES FRONT

Caption : All India Minorities Front and Delhi Pradesh National Panthers party activists demonstrating against UPA Government to stop gender bias in the forces and start recuitment of women in the forces from Jawan to officres Levals and also demanding immediat provision of 33% reservation for females be implemented in all jobs in armed forces in the country to end discrimination, at Jantar Mantar in New Delhi on June 06, 2006. Photo Anu Pushkarna