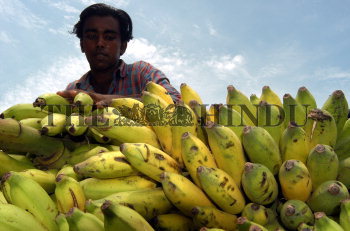 Caption : Bananas being loaded at a vegetable market in Kochi, Kerala. Horticulture contributed 28.5 per cent of GDP in agriculture and 52 per cent of export share in agriculture from cultivated area of 10.0 per cent with India being the largest producer of banana with an annual production of 16.8 million tonnes. mango and cabbage and enjoys the highest productivity. Photo: K.K. Mustafah 21/06/06