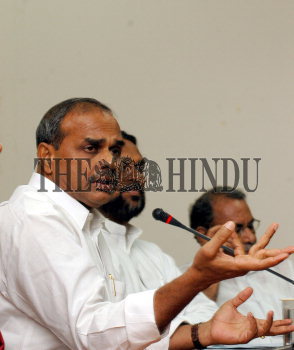 Caption : Andhra Pradesh Chief Minister, Y.S. Rajasekhara Reddy is reacting to a question at the Press Conference held at the CM's Camp Office in Hyderabad on June 20, 2006. He told that the Government will file an appeal before the Divisional Bench of AP High Court on June 21. 2006. Earlier the AP High Court struck down the State Election Commission's notification on the Panchayatraj Elections in the State on the grounds of improper voter list. Photo: Mohammed Yousuf