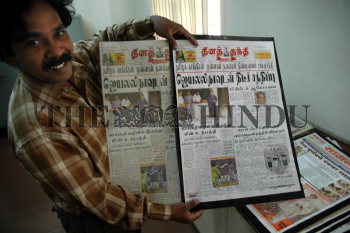 Caption : Darla Nageswara Rao, displaying a handwritten copy of newspapers in 12 different Indian languages in Hyderabad . A mere thought of doing something new and unique led Darla Nageswara Rao, who works as an artist in Government Printing Press at Chanchalguda,his hobby is making replicas of newspapers of various languages including Tamil, Kannada, Malayalam and Punjabi. He started off with the replica of a Telugu daily, and now he has come up with the 'carbon copies' of various newspapers.This 43-year-old from Tenali in Andhra Pradesh now plans to copy newspapers of various other languages. Photo: Mohammed Yousuf