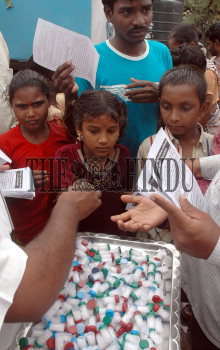 Caption : Communist Party of India (Marxist) activists distributing homeopathic medicine to prevent 'Chikungunya fever' in the slums of Baghlingampally in Hyderabad. The State captial is experiencing such a rare form of viral fever caused by alphavirus which is spread by mosquito bites. Over hundreds of people are admitted in the various hosptials for treatment with viral fever, of which 70 patients are diagnosed with the symptoms. Earlier the health authorities sounded Chikungunya fever alerts in the twin cities. Photo: K. Ramesh Babu 20/06/ 2006