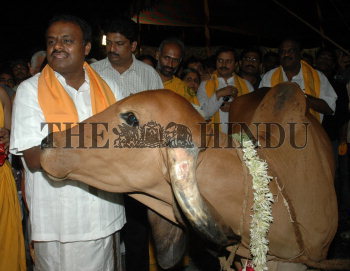 Caption : Chief Minister H.D. Kumaraswamy performing puja to a cow before occupying his official residence, Anugraha, in Bangalore on June 19, 2006. Changes were carried out to the building according to Vaastu. Kumaraswamy's family members, including former Minister, H.D. Revanna, attended the function. Photo: K. Murali Kumar