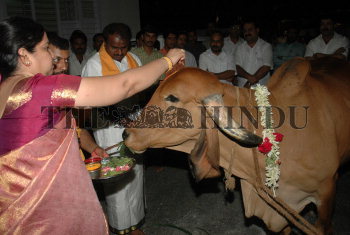 Caption : The Karnataka Chief Minister, H.D. Kumaraswamy looks on, as his wife, Anita performing pooja before occupying the official house, Anugraha after Vaasthu Compliant renovations made recently, in Bangalore on June 19, 2006. Kumaraswamy to enter the house at 10.28 p.m along with the cow (name Nandini, breed known as Gir from Gujarat) with a religious ceremony. As the house is said to be jinxed as most Chief Ministers enter it after making many changes as advised by vaasthu experts, former Chief Minister, N. Dharam Singh had occupied the house till recently, as Kumaraswamy was not keen in occupying it. Photo: K. Murali Kumar