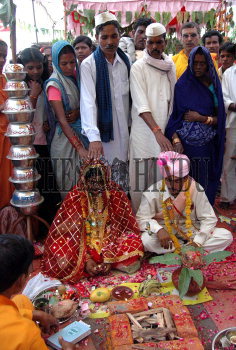 Caption : Children of jail inmates, who are on life term, were tied in wedlock in the Bhopal Central Jail on June 18, 2006. A newly wed couple being blessed by their fathers, both are jail inmates, during the marriage ceremony, and three couples, two Hindu and one Muslim, have also tied nuptial knot on the occasion to mark Father's Day celebration. Photo: A.M. Faruqui